Can we still improve quality control after 500+ years of experience?


This year Bavaria celebrates 500 years of one of the first laws regulating food safety and quality. Although roots can be dated back as early as 1400s’, in 1516 a series of orders were imposed in Bavaria and later in whole Germany called “Reinheitsgebot” – the Purity Law. According to it, the only ingredients that could be used in the production of beer were water, barley and hops.

The latter was initially used as a preservative as it adds to beer stability by virtue of its antibacterial properties, but it soon became fundamental to achieve desirable flavor and accent in beer. Depending on the style of beer, hops can add balance to the finished product through bitterness, flavor, and aroma, which is given by essential oils produced in the female flower of the hop plant[1]. 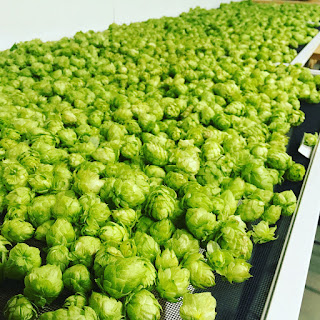 All laid out for drying. via photopin

Because many factors affect essential oil production and preservation, every season holds the potential for significant variation in both the total amount of oil and its composition, even for a single variety. Apart from soil quality and irrigation other major factors affecting hops quality are of course pests and diseases causing stress on plants and consequently reducing quantity and quality of yield (alfa acid and essential oil levels). Therefore, it is important that each of the plant distress factors are being controlled as much as possible.

With Slovenia being the 5th largest hops producing country in the World, the importance of controlling the inhibiting factors is that more articulated. Therefore the Slovenian Institute for Hop Research and Brewing (SIHRB) was established by Slovenian hop growers in 1952. Over a span of more than fifty years it has carried out a significant scientific research work in the area of hop growing and the brewing industry. Some of the areas of SIHRB’s activities are creation of new hop varieties, development new methods in technologies of hop production, implementation IPM (integrate pest management) in hop production and development of new hops production and harvesting technologies. 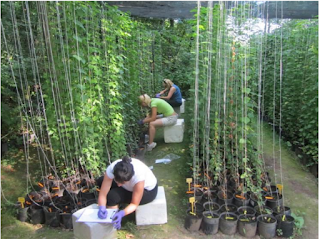 SIHBR conducts research on integrated pest and disease management methods for hops. Lately, one of the major insect pests in hops in Slovenia is European corn borer (Ostrinia nubilalis (ECB)) last ten years. Its presence on hops in Slovenia has been monitored by SIHBR for over 35 years and the economic damage it causes has been increasing significantly over the last 10 years[2].  One of the major challenges in monitoring ECB, according to dr. Rak Cizej, is that monitoring of ECB with pheromone-baited traps cannot yet be used in practice in prognosis system for forecasting. 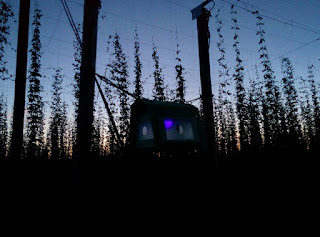 Being aware of the problem of monitoring ECB also in other crops where it is present (primarily maize), Trapview has been cooperating with SIHRB in developing the automated light trap using special LED UV light to attract this elusive pest. The aim of Trapview automated pest monitoring system is to make the crop protection decision process simpler and easier for all stakeholders (forecasters, advisory staffs, farmers). The decision makers can base their actions on actual pest data sent from the automated traps placed in the field and processed by Trapview advanced image recognition, machine learning and data analysis algorithms that enable better crop quality control.
So this is how after 5 centuries of our ancestors’ endeavors SIHRB and Trapview are making joint efforts to make your next beer taste that much better.*